Natural disasters are devastating, but the aftermath and long recoveries can be just as damaging to children and their families living in poverty.

On May 18th, 2020, along the southern coast of Bangladesh, the air filled with the sound of the coast guards howling on the 'sound trumpets'. The alarm system warned the coastal communities of the super-cyclone gathering around the Bay of Bengal.

The sirens along the coast sounded every alternate hour, alerting residents to prepare to evacuate. Even the animals seemed to obey the warning: birds flew inland, away from the coast, and cows and ducks stood petrified as people ran around, trying to shift their valuables and belongings away from the impending danger. 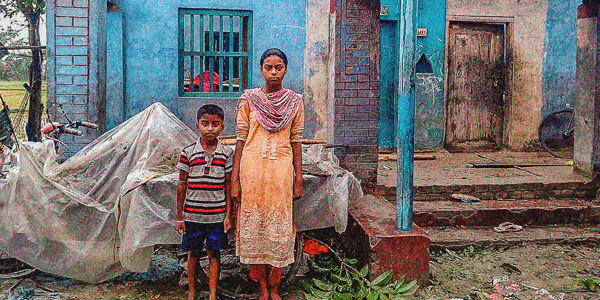 “Ever since the warnings began, it reminded us of the experience we had in 1991 when struck by the tropical cyclone,” said Dipankar, the project manager of a local child development centre. Having experienced a super-cyclone in his youth, he had prayed that he would never again see such a large-scale disaster.

In Bangladesh alone over 300,000 homes were damaged or destroyed, 26 people lost their lives and the livelihoods of 1 million more were impacted.

Super-cyclone Amphan—the Bay of Bengal’s fiercest storm this century—struck India first on the evening of May 20th, trampling everything in its path before it reached the coast of southern Bangladesh. Power supplies were cut and homes were blown away. As the storm drew closer, the government evacuated over 2.4 million people to shelters. According to the United Nations, in Bangladesh alone over 300,000 homes were damaged or destroyed, 26 people lost their lives and the livelihoods of 1 million more were impacted. Another 10 million were affected by the cyclone in other ways as the storm destroyed schools, bridges, road networks and fresh water sources.

In one community, thousands of lives may have been saved by the staff of a local Compassion child development staff. The team walked from door-to-door in their community, checking to ensure families were evacuating. Fortunately, every resident in the area was able to find safety at the government-built cyclone shelters. You too can play a part in helping children and their families by giving to the Restore Hope Appeal today.

One Compassion assisted child, 19-year-old Ripon, managed to take his family’s prized cattle to safety. When he and his family returned home, they found their house battered by fallen trees and branches but still standing.

Another child, 12-year-old Liya and her family, were not as lucky. After a night at the evacuation shelter with her parents, she and her family discovered their home had been flattened by winds. Likewise, 12-year-old Akash and his family also lost possessions in the cyclone. His mother had carefully saved money to buy him a school bag, but the savings were destroyed.

"I couldn’t think straight rationalising between the safety of my family and losing my life’s savings for making my home."

The devastating storm is an additional challenge for families already living through the stress of the COVID-19 pandemic. “My Sangeeta is only 10 years old. I couldn’t think straight rationalising between the safety of my family and losing my life’s savings for making my home,” says her father, Aviram, almost breaking into tears.

The one night that families spent at the cyclone shelters was rough, with the threat of COVID-19 on everyone’s minds. Now that the storm has calmed comes the hardest part of a cyclone: the aftermath of cleaning, rebuilding and trying to return daily life. Even in 2021, recovery continues. Thankfully, in this community, everyone survived the storm, and tomorrow is a new day.

When you give to the tax-deductible Restore Hope Appeal, you not only help children and their families in the aftermath of natural disasters like cyclones, but give them hope for the future as well.