A New Hope for Alphonse After a Tragic Car Accident

An innocent stroll with friends after school changed the life of four-year-old Alphonse, who was struck by a car and left paralysed. While his life has changed, he still has a hopeful future.

It was a typical day of nursery school for four-year-old Alphonse. He went to class at the Evangelical Friends Church of Rwanda adjacent to his house, completed his studies and finished for the day, ready for the return home. But rather than heading straight there, Alphonse decided to wander with his friends.

He didn’t make it home that evening.

She called the project staff to check if they had seen him, but all they knew was that he attended class and left with friends as usual. They decided to call each staff member and work out which streets and homes they would look for Alphonse.

“We went to his friends’ homes and to the streets to ask if anyone had seen Alphonse,” says Ignace Kanamugire, the project director.

“We went to Lake Kivu in the neighbourhood to check if any children were seen playing around the lake and if there was the possibility of anyone drowning, but there was none. We did not find Alphonse all night.”

It wasn’t until the next morning, when Ignace asked Alphonse’s schoolmates where they had last seen him, that they were able to find him. Four-year-old Ntwari made gestures at the road, indicating that Alphonse had been struck by a car and that the rest of the kids had run away in fear. Ignace asked Ntwari to take him to the scene, and locals in the area informed him that he was taken to the district hospital by the driver.

Both Ignace and Marie Chantal rushed to the hospital, where they found Alphonse lying unconscious in bed with oxygen tubes tied to his nose.

“Alphonse was breathing very lightly and was very still. Although there were no bloodstains on him, he seemed very lifeless,” says Ignace.

The person who had struck Alphonse left someone at the hospital to watch over him while he went to the police station to make a statement. He never returned.

Alphonse spent three months in a coma being fed through a tube. Through the community health insurance Compassion had secured for him, he was able to be transferred to the three different major hospitals he needed for treatment. The doctors said Alphonse had lost consciousness because of severe head trauma.

While Alphonse was being treated, the church spent three days in fasting and prayer for his healing. They also raised funds to support his family so they could afford the special diet Alphonse needed to recover.

After four months in hospital, he was discharged and sent back home. But he was a different boy. Alphonse was paralysed from the waist down and unable to walk or sit without support. He struggled with memory issues and initially was unable to recognise even his family members.

His family were determined to adjust to their new normal as best they could. But life was difficult. Alphonse needed around-the-clock care, so Marie Chantal was forced to stop selling vegetables at her roadside stall.

“I could not work anymore. I just prayed to God and showed him my situation. I cannot work because if I do not change Alphonse’s diaper in time, the urine will burn him and cause him wounds. I cannot hire someone to do that for him because I cannot afford to pay them either,” she says.

Bills were piling up. Unable to work, the family quickly fell behind on their loan repayments for their roadside stall. The microfinance institution was ready to auction their home.

The Compassion project facilitator, along with the church and Alphonse’s family, were able to secure legal compensation from the insurance company of the vehicle that hit him. The family was entitled to damages, which helped them pay off the loan and grow their business, credit-free.

With Alphonse’s medical reimbursement, Compassion helped the family purchase a house, which they can rent out to provide them with a stable source of income to cover Alphonse’s ongoing medical expenses. Marie Chantal felt a weight lift off her shoulders. 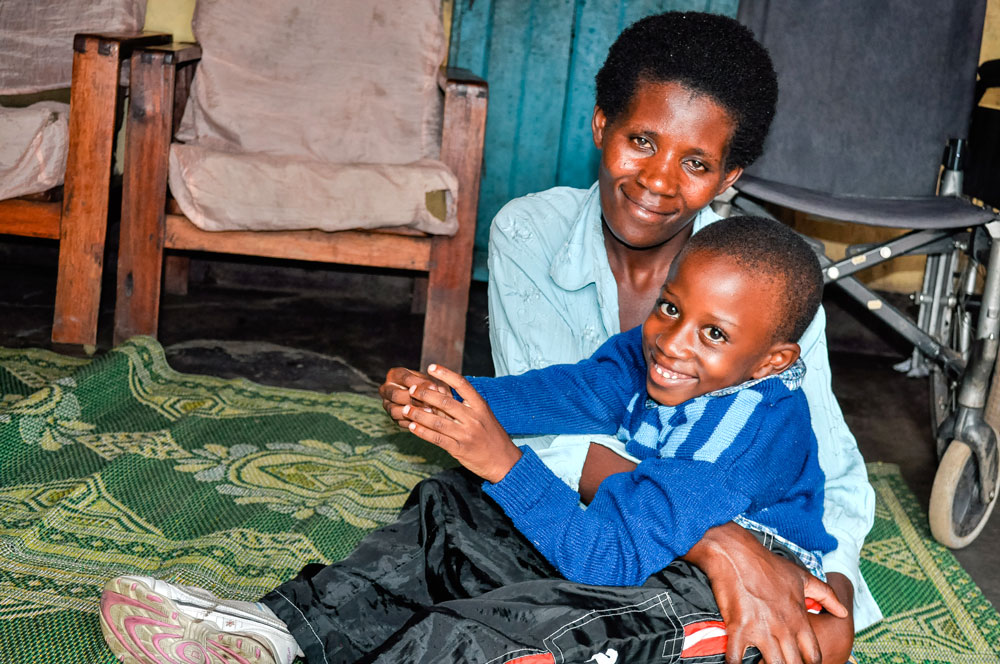 Today, Alphonse has made remarkable improvements.

“He can now hear, which he was not able to before. He can now see well, which was difficult before. Alphonse can now clap his hands and play with toys and remember people, which was not the case before,” says Ignace.

“Today Alphonse is happy and can laugh. There was a time when he used to be sad because he was in a wheelchair, unable to move by himself, but his attitude changed with time through the counselling and encouragement and prayers of the church.”

The family are so grateful for all of those who played a part in his recovery.

“I thank those who supported our child all through his treatment after the accident,” says Marie Chantal.

“I pray for God’s blessing upon them because I know God knows their names.”

To help those facing hardships like Alphonse, please donate to our Health Critical Need to provide emergency medical care, nutrition and ongoing treatment to children like Alphonse.