It was an unfortunate accident that saw God move in a big way in Carmen’s life, guiding her to community and in turn, fellowship. Her story is one of perseverance and shows the power of prayer.

It all began with a craving for a hamburger. Carmen, a mother of two, routinely rode her motorcycle around the streets of Consuelo, Dominican Republic, and one evening, she decided a quick trip with her neighbour to pick up the treat would be just the ticket. She was five months’ pregnant at the time.

What followed was Carmen awaking to fire engulfing her body, with no recollection of how it occurred.

“The reality is that I still don’t know what happened. I was used to driving the motorcycle,” says Carmen, with her head down and tears in her eyes.

On the short one-kilometre ride back home, Carmen and her neighbour were struck by a motorcyclist who had lost control while doing stunts.

“I reacted when I found myself on the ground covered in fire. [There was no damage to] my motorcycle, nor the guy or his motorcycle, nor my neighbor… nothing happened to anybody. But although they were fine, without even a scratch, I [had to] put out the fire on my body by myself. Nobody helped me,” says Carmen.

Ninety percent of her body suffered third- and fifth-degree burns. And even though she was severely injured, she managed to run back home and ask for help. Neighbours took her to a nearby hospital, where she was transferred to the burn unit of a hospital in Santo Domingo, a two-hour drive away.

“When I got to the hospital in Santo Domingo, the doctor told me that he had to amputate my left arm immediately because it was too burned, but the only thing I thought about was my baby. I was just a few weeks from completing seven months of my pregnancy,” says Carmen.

After being prepped for surgery, it was an anaesthesiologist who discovered Carmen was pregnant and refused to put her and her baby through the procedure. Instead, she was taken to a cold room in the intensive care unit. 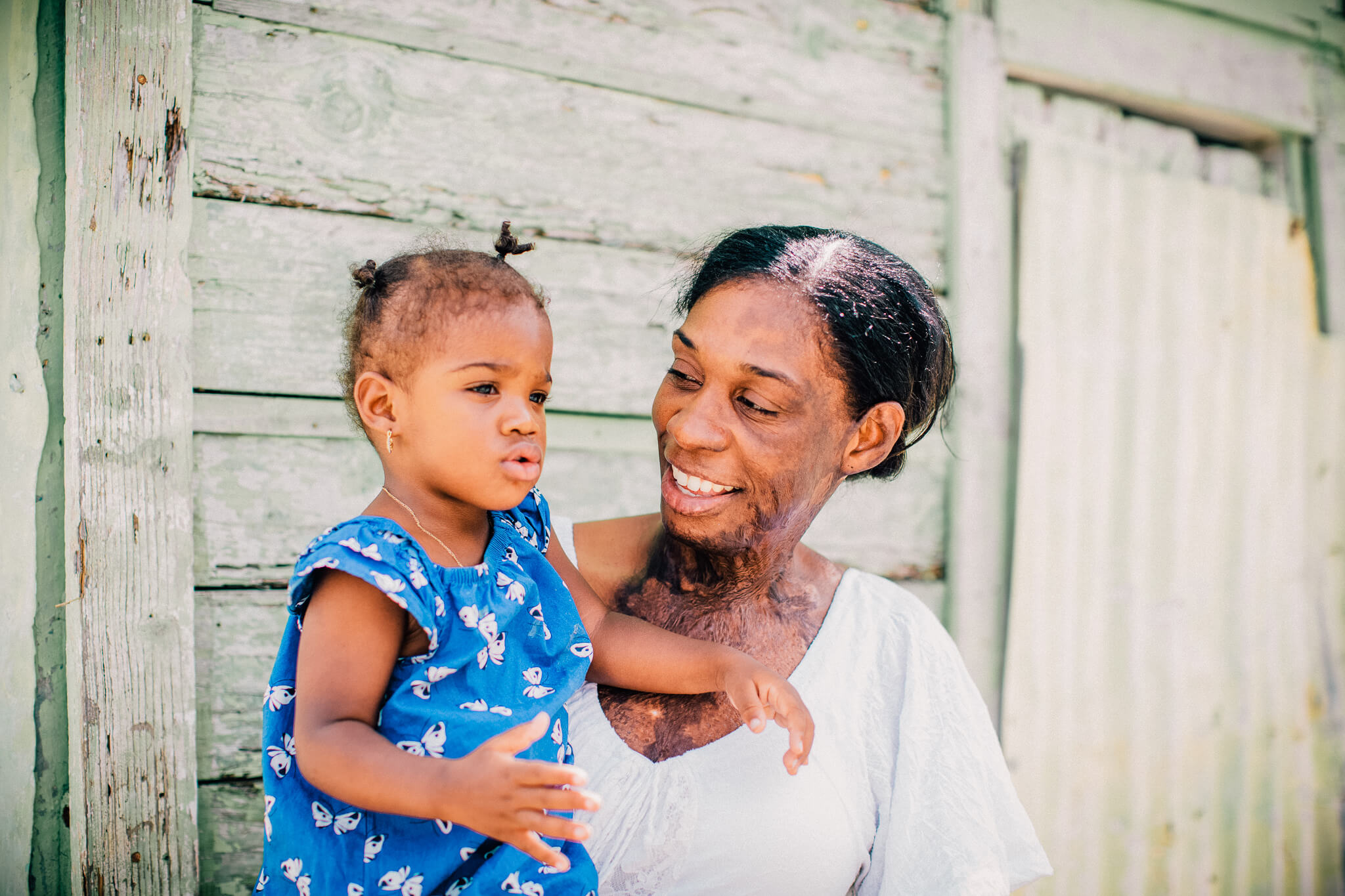 In the days that followed, Carmen’s mum was repeatedly told that today would be Carmen’s last, so bleak was the doctors’ prognosis. Yet Carmen remained optimistic.

Carmen’s recovery stunned those around her. She never lost her five senses, her mental faculties or even consciousness, and of the 12 people in the intensive care burn unit at the time, she was the only one to survive.

Within days, Carmen was discharged to recover at home. And most importantly, she was able to wait until the seventh month before delivering her baby daughter, Karla, via C-section.

Sadly, the father of her children and husband of seven years left the night of the accident, so she moved back in with her mother, Jacquelin, shortly after the birth. But Carmen was not without support during this time. Word of her tragedy had spread throughout Consuelo, eventually reaching the ears of Mercedes, the administrative assistant of the Child Sponsorship Program in El Eden, and Candida, implementer of a Compassion Mums and Babies survival project.

“We visited Carmen to help her out and pray for her,” says Candida.

“Carmen was so lovely and kind and greeted us with such love and a big smile, as if we knew each other for a long time. After seeing her situation, Mercedes and I told the project facilitator, Erika, about Carmen’s condition, and immediately we registered her in the Mums and Babies survival project. She was all burned, with her left arm stuck to her neck, and was heavily pregnant. She really needed help.”

Candida’s follow-ups and visits, full of prayer and support, allowed the pair to establish a beautiful friendship. 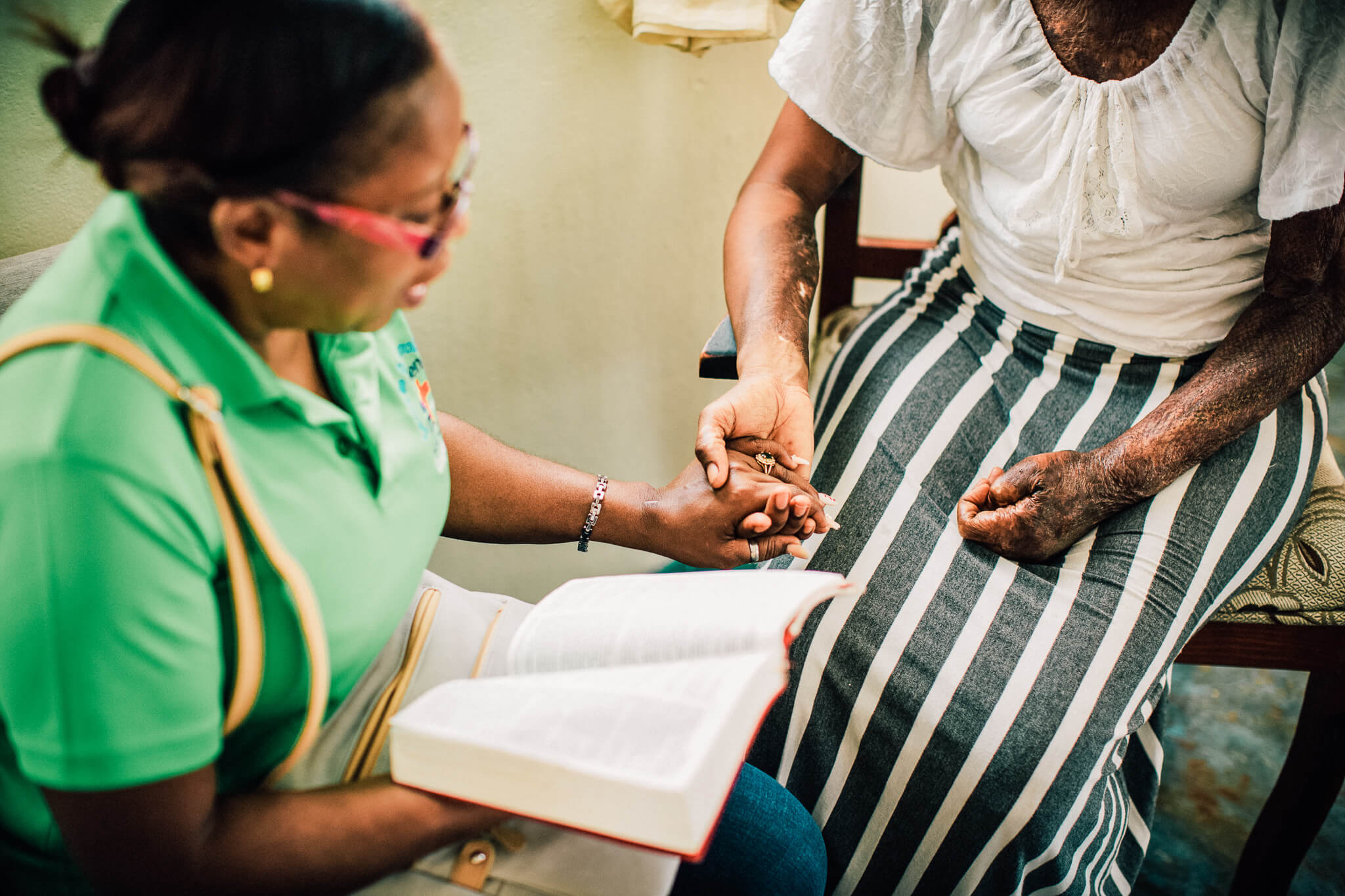 On December 29, 2015, Karla was welcomed into the world. Both Carmen and the baby were in a delicate condition, with Karla weighing only one-and-a-half pounds at birth and suffering a stroke immediately after the caesarean. She was also blind and acquired the bacterial infection, pseudomona, that her mother contracted through her severe burns. Carmen also had to recover from the C-section incision and suffered from high blood pressure.

But God’s goodness prevailed, and the two began to recover quickly, to the surprise of the doctors.

“I thank God that today I have my daughter and also my arm, even though I can’t use it. My baby is healthy, with all of her faculties, has a good weight, is very clever and is almost walking,” says Carmen.

The Iglesia Bíblica Cristiana Consuelo (Christian Biblical Church Consuelo) and its Mums and Babies survival project have helped each step of the way throughout Carmen’s recovery. 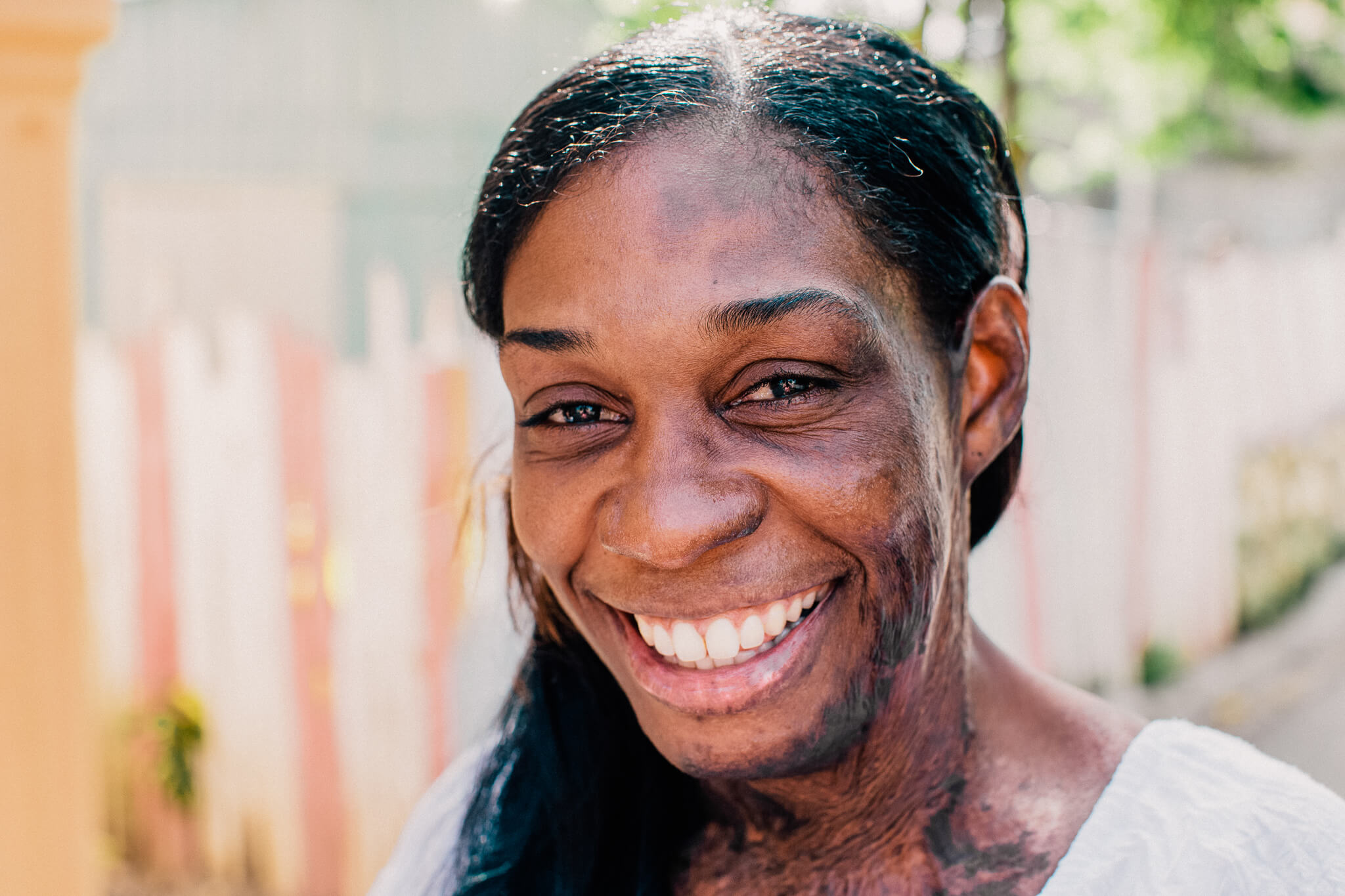 Thanks to the project, Carmen is able to receive the twice-daily medicine she needs for her injured left arm. She is also provided with special clothing to dress her skin and assisted with transport and medical expenses every time she has to travel to Santo Domingo for her checkups.

The survival project not only helps mothers and babies, but it also impacts the lives of the implementers, allowing them to be used by God to help others. Their hearts are filled with love and an attitude of service.

“I give thanks to God for the survival project. He has poured out so much mercy and love on the hearts of our donors. Every time we need resources to help Carmen, we’ve always had them. It is a joy to me to have the privilege to work for this community this way,” says Candida. 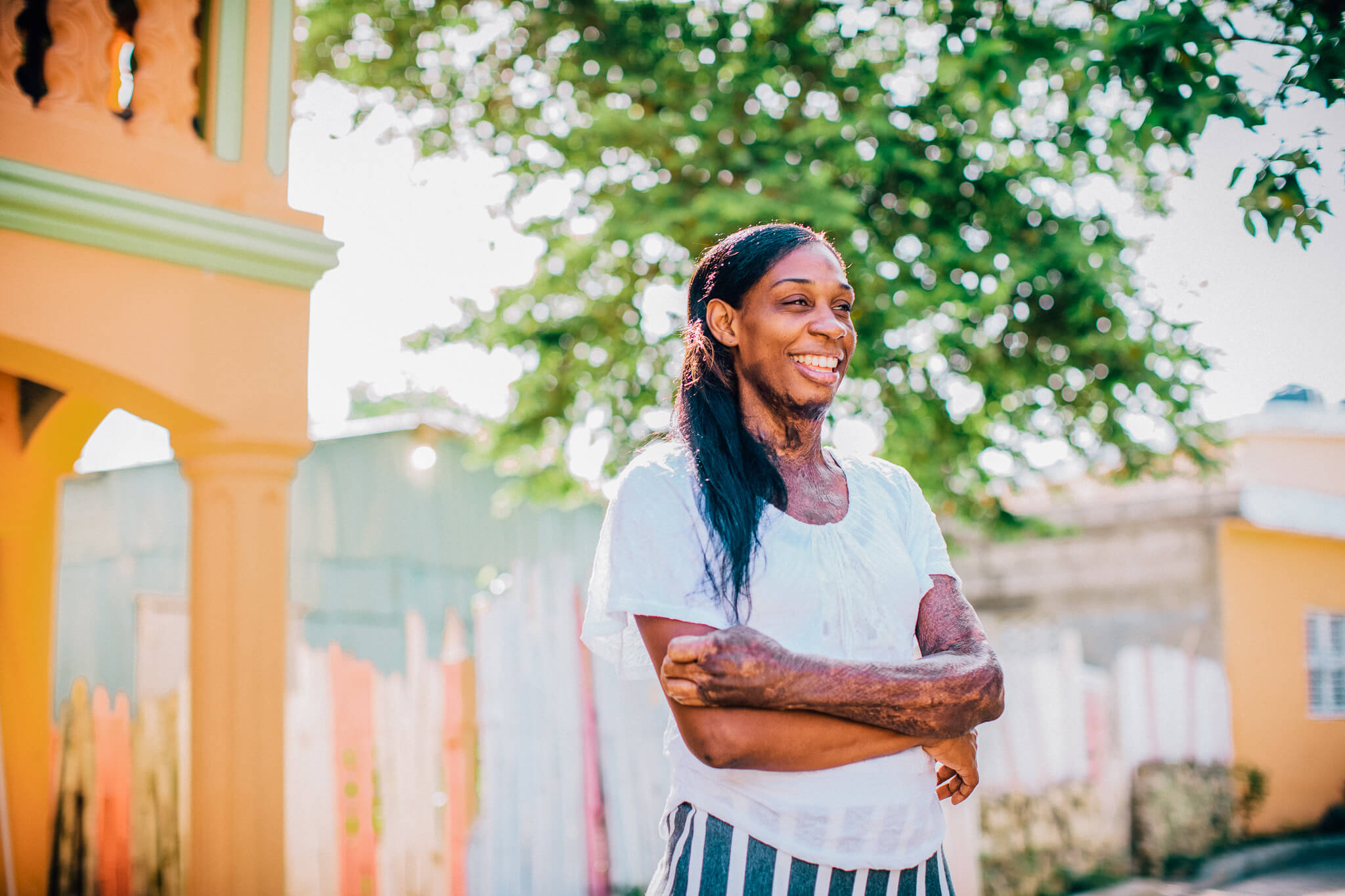 After seeing God’s hand over her situation, Carmen accepted Jesus as Lord and Saviour during her time at the hospital.

She is a testament to faith, resilience, perseverance and the power of prayer. Let us pray for Carmen and all the women like her around the world.

To come alongside mums in poverty like Carmen and help provide the best start to life for their babies, please donate to Compassion’s Mums and Babies fund.