When natural disasters strike, the local church is often the first to reach out and restore hope.

Swarms of locusts blanket the sky, ready to devour anything they find. When they descend, months of hard work are ravaged within hours. Nothing is left, not even fodder for the cattle. Locust invasions are a devastating blow for farmers who labour daily to ensure food security for their families.

"I have never seen anything like this in my lifetime."

According to the United Nations Office for the Coordination of Humanitarian Affairs, higher rainfall than usual at the end of 2020 created ideal conditions for locusts to breed. Among several countries affected, Ethiopia found themselves facing not only a devastating plague of locusts, but the remnants of earlier floods as well as COVID-19.

While the government's agriculture bureau conducted aerial sprays of pesticide to kills locusts, neighbouring counties were put on high alert to do whatever they could to harvest their crops quickly.

As a father of seven children, Behailu's large family depend on his farming work to get by day-to-day. Every gust of wind causes him to scan the sky in alarm, waiting in suspense for the locust swarms to arrive. "We were told to harvest as quickly as possible. Because of high demand, hiring help became unaffordable. I didn’t know what the day would bring," he says. "As much as I worked hard, when the day ended, the field looked untouched. I said to myself that I would be lucky if I could save something for my kids to eat."

When you give to the tax-deductible Restore Hope Appeal, you can help farmers like Behailu in the aftermath of natural disasters.

A Light in the World

When hope seemed to be lost, the local church was there to help.

"You are the light of the world… let your light shine before others, that they may see your good deeds and glorify your Father in heaven." —Matthew 5:14,16 (NIV)

"What affects them, affects us!" says Pastor Solomon, the leader of a local church that partners with Compassion. "As part of the community, when the plague came and when we saw the devastation, we decided to coordinate the church members and work with the church partner staff to mobilise the youth to help the farmers with their harvest. We wanted to pass the message that we stand by them whenever they needed support. It was the least we could do." 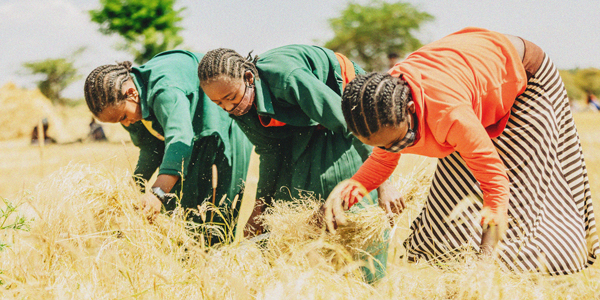 Behailu was the first farmer to receive their help. His daughter Dagem, a 15-year-old in Compassion's Child Sponsorship Program, had witnessed her father’s distress ever since the news of locusts in neighbouring counties broke. Her father’s disability, coupled with the unaffordability of daily labour, had put the family at risk.

"It was easy to see my father’s stress. We were all worried."

"It was easy to see my father’s stress. We were all worried," she says. "However, after the church and my friends from the centre helped with the harvest, my father is relieved. I consider myself very lucky to part of a community that cares about me and my family. I pray that other farmers would also get the help they need."

Her father couldn't believe it when a team of laborers showed up at his farm. "When friends of my daughter, people I know from the church and the staff, suddenly came to my farm, I couldn’t believe my eyes," he says. "The work that could take me weeks was finished within hours. They were a Godsend."

The church continued to help caregivers harvest their crops, even farmers whose children are not part of the Child Sponsorship Program. The local government has recognised the church’s initiative as one of the most commendable acts of community service and one that inspires others in the community to do the same.

"We were intentional when we included the students in the program. We wanted to instil in them the value and joy of giving back," says Mr Adamu, the local project director. "We wanted them to focus on helping others and respond to their social responsibilities. They are the ones who will take over the country, so we wanted to shape them early on."

The local church's solidarity with the farmers has earned them a good name in the community and with the local government. Through Christ, the local church continues to be a light in the world that restores hope.

To partner with the local church in restoring hope, you can give today to the tax-deductible Restore Hope Appeal.