The Story Behind Shakul's Striking Eyes

Shakul was born with a rare genetic condition in Uganda which means he looks a little different. Without access to a doctor, his parents didn’t understand the reason for his appearance and abandoned him shortly after birth. But God had a plan to care for this young boy.

When Shakul was born, his blue eyes, dark skin and white hands and feet shocked everyone—including his young parents. His mother’s family rejected him and his father, Sowedi, could not take them in.

That’s when Namatovu came into the picture.

“My son called me and said he had a son but that ‘he has different colours’. He said he has no money and the parents of the girl chased her from home with her baby. I didn’t know what to do so I told him to bring the child and mother to live with me,” says Namatovu.

“I was astonished. It was strange. I wondered if he was sick; he was very slim. I called a friend and said, ‘Will this child survive?’ She said ‘He will if you care for him’.

Before long Namatovu had bonded with her little grandson. She began to see him like any other baby; precious and loved. 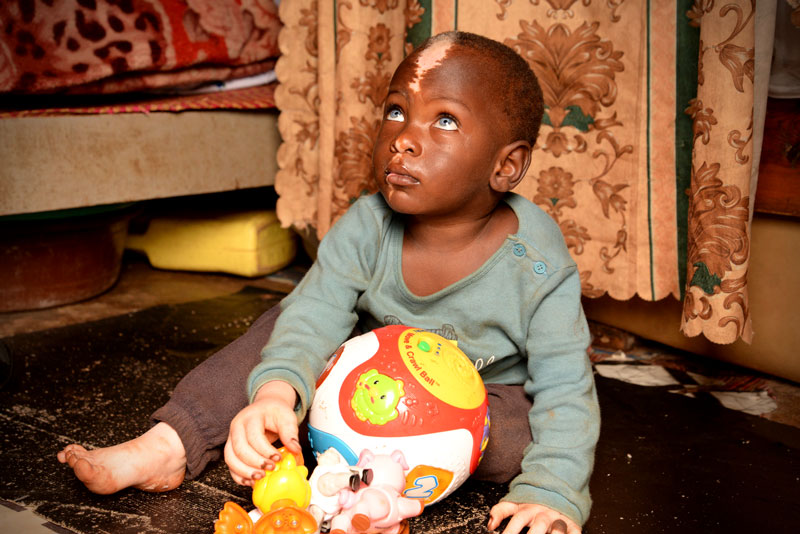 But Shakul’s young mother struggled to create the same bond, refusing to breastfeed him or attend to his crying.

“After some time, she [Shakul’s mother] said she was tired and wanted to go back home.”

But Namatovu knew in her gut what that meant. “I told her, ‘please never abandon the boy, if you ever get stranded, return the boy to me’.”

One night she received a phone call from her son to say Shakul had been left on his front door step. The baby was naked and alone.

Namatovu knew that if the child was to survive, she had to care for him. Not knowing how she would provide for Shakul, she became his carer anyway.

Soon after, she was asked to cook lunch at the nearby Compassion centre in Kampala. She took Shakul with her. Visitors and staff noticed the little boy and his unusual features and recognised that he needed help. As soon as there was a place for him, he was registered into our Child Survival Program.

Namatovu was overcome with joy, knowing this would be a turning point for her and Shakul. A health check-up was organised by Compassion staff and revealed he has Waardenburg syndrome, a condition that causes skin changes and hearing loss.

Staff at the Compassion centre love Shakul. He is active and loves playing with the other children. He interacts well with others and is also very sociable, sharing treats with his peers.

Namatovu says the love and care shown to her and Shakul has had a lasting impact on them.

“First of all, they have shown me love and my child love. They give me employment to cook [at the centre] and I earn some money. They gave us food and soap. Because I didn’t have anywhere to get food, I would wake up praying wondering where to get food,” says Namatovu.

Shakul’s sponsor has also been a blessing to them. Namatovu still cannot believe his generosity and love. Recently, she accepted Jesus as her Lord and Savour—a result of the kindness shown to her.

Staff at the centre are amazed at the transformation in Shakul. He is a little boy known and loved.

You can help a child like Shakul and his grandmother Namatovu through a donation to Mums and Babies [the Child Survival Program].

Words by Caroline A Mwinemwesigwa and Rebekah Wilesmith.