In Payatas, a rubbish dump so mammoth locals have dubbed it Smoky Mountain, families live a dangerous existence scavenging plastics to sell. But, Colin Buchanan writes, God is at work here. His gospel is bearing fruit. And He’s not simply recycling. He’s in the business of regeneration.

Do you have some unfolding, memorable views that you’re able to replay in your mind?

As a five-year-old boy heading off on holidays in Ireland I recall the tingling expectancy of looking ahead, past my parents’ shoulders, from the back seat of our little Mini Minor station wagon. As we climbed our way up another hill the road crested and disappeared and I could see only sky through the windshield. What was beyond? What a joy to feel the exhale of downward momentum and, at last, to see the vast blue of the ocean in the distance.

While I was on tour in the Northern Territory in the late 90’s I had the unforgettable experience of seeing Uluru (Ayers Rock) rising from the vast outback of central Australia. It dominates the tabletop horizon, its ochre shoulders looming high above red dunes and spinifex grass.

In 1988, after six months of living in Bourke, perched on the parched plains of far western NSW, we made the long drive back to Sydney. There’s a point on the main road over the Blue Mountains where, at night, glimpses give way to the sprawling city's vast incandescent constellation of twinkling lights. It was like it was sucking us in. I was a local, yet I felt a strange dread at the sight of it.

My most recent unveiled view was in the Phillipines, on the northern fringes of the nation’s capital Manila, a city of nearly 13 million people.We had crawled and jockeyed and ground our way through mad traffic to the municipality of Quezon City. As we descended a hill, one of our group of visiting Sydney ministers gave a gasp, pointing towards a huge hill in the middle distance. 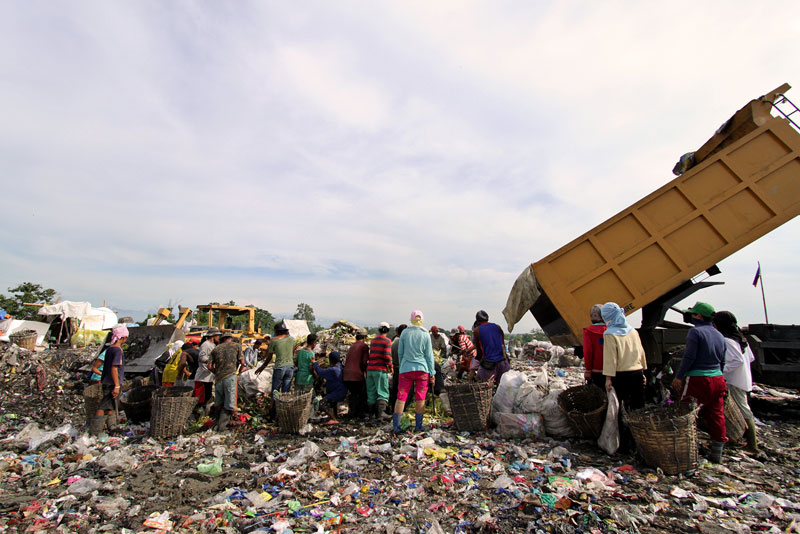 A dump truck unloads new trash at a dump site in Iloilo City, the Philippines, as men and woman wait to sort through it.

Strangely (on reflection), I scrambled for my phone to take a picture. The view was still sifted by the tangle of streetside buildings, obscuring our outlook, giving no real opportunity to record the stunning scale of this monumental mound of garbage. What I didn’t know was that we weren't just heading for a much closer look. We were going to get a glimpse into the lives of the people whose meagre livelihood is tied to Manilla’s relentless torrent of trash, whose hillside homes boast an unhindered view—and smell—of the 25-hectare Payatas dumpsite.

We’d come to Payatas to see the work of Compassion’s Child Sponsorship Program in one of the local churches, perched on the spine of a ridge that surveys farmland and the Marikina River valley to the east and, to the west, the dump the locals call The Second Smoky Mountain. 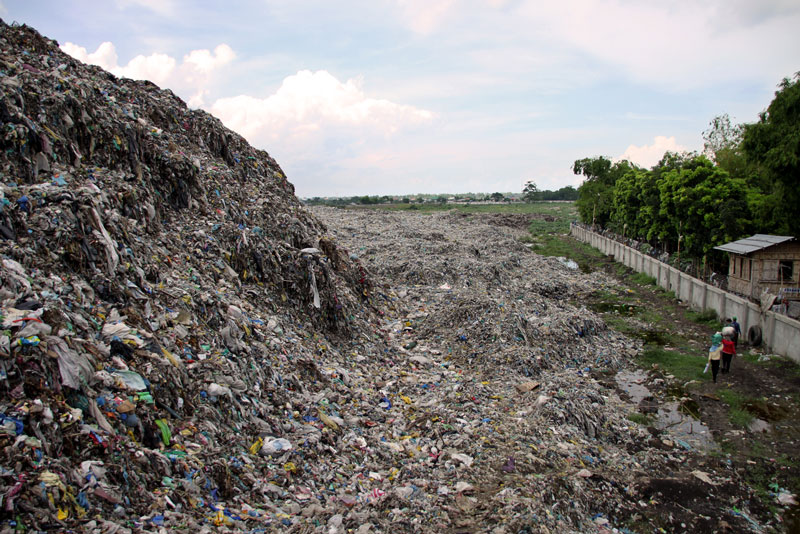 A mountain of rubbish at the dump in Iloilo City, the Philippines.

The first Smoky Mountain was so-called because the spontaneous combustion of rotting refuse created restless, reeking plumes which endlessly escaped from its depths. A great, stinking man-made volcano.In the year 2000, the dumpsite collapsed in a deadly, toxic, fiery disaster that claimed hundreds of lives and left many more homeless.

Not long after, the dumpsite reopened at the request of the local residents, whose living comes from scavenging plastics and metal in what seemed like a perilous and desperate sort of post-discard recycling. The second Smokey Mountain once more rose out of the valley, this time engineered for stability and with an integrated methane power plant to burn off the captive gasses.

It was winter when we visited, the temperature still sitting around the 30 degrees Celsius mark.Every day, in the sticky, stifling heat, mothers and fathers ascend Smoky Mountain to join the army of scavengers. A sack of empty water bottles will earn about 30 pesos, or A$1. On a good day, they may walk home with 120 pesos in their pocket. 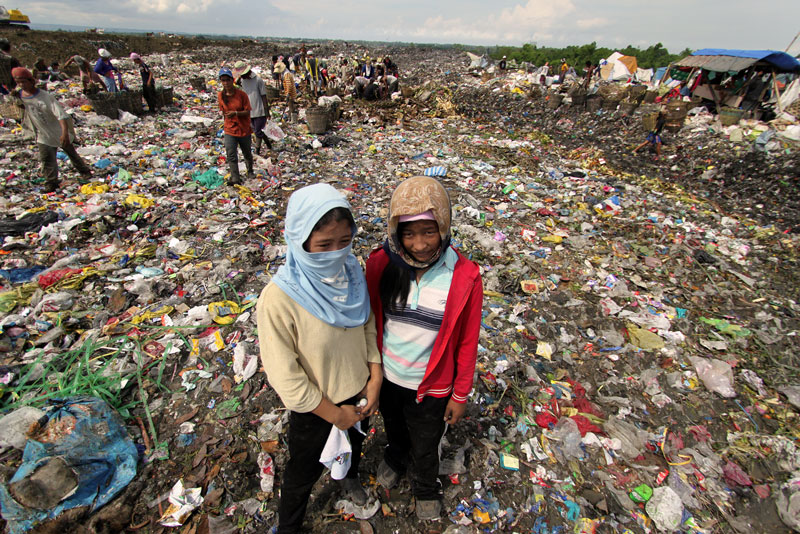 Women scavenge for recyclable plastics at a rubbish dump in Iloilo City, the Philippines.

On a bad day, they may clear 80 pesos or less. And a couple of weeks before we visited, one of the huge bulldozers used to compact the rubbish backed over and killed some of the scavengers. It’s unimaginably perilous, filthy, uncertain work.

I didn't Google that information. It was shared to me by the parents of one of the Compassion-sponsored kids who attends the program at the local church. We were guests at their two-room home. We entered through a small vestibule used for the storage of scavenged materials and containing an open fire for cooking. Two steps and we were in the main sleeping and sitting room. A fan vainly puffed pungent air, sunlight sifted through gaps in the walls and roof. The family were honoured to have us, friendly and frank about the life they lead, Mum in her boots and gloves on Smokey Mountain and Dad selling cigarettes on the roadside around Quezon City. Their two sons listened on. The younger, playing at their feet, told us he wanted to be a policeman when he grew up. The older, in junior high school, patiently answered our questions. He wants to be a pilot when he leaves school.

We were accompanied by the pastor of the church, who was familiar with not only the family we visited, but with many of the members of the community we passed as we picked our way through the litter-scattered hillside community.

Like his neighbours, the pastor’s work is hard and, like them, he is poor in finances. But the church is filled to capacity each Sunday. Their Compassion project currently serves around a hundred children, but there are plans to expand their buildings, God is supplying their needs and the work is bearing fruit.__And the greetings as the pastor walks the hillside shows that God’s man knows these people and he loves these people. And they love him.

Back at the church, the Compassion project co-ordinator told us her story. She grew up on Smoky Mountain. Her family were scavengers, too, dining daily on a random menu of Jollibee. The burgers, fried chicken and rice they shared was never purchased from the Philippines’ slick, omnipresent (and home-grown) fast food juggernaut (it’s bigger here than McDonalds and KFC). She ate the unsold fast food, dumped daily at close of trade. A sort of monstrous manna, sustaining her, day by day. And here she was, by God’s grace, transformed and bringing hope and love and care to a community she’s tasted and experienced from the inside.

Payatas is Dumptown. Smoky Mountain casts a long shadow and the smell of poverty is real. The dump’s not going anywhere and, on the surface, Payatas doesn’t seem to be changing. It would be offensive for me to walk amongst its people for 10 hours then head home, to peace, stability and wealth, where I would then write this dire predicament into a tidy metaphor or allegory. The right thing to do is simply to tell it as I saw it.

God is at work here. His gospel is bearing fruit. He’s not simply recycling. He’s in the business of regeneration. As his people proclaim and pray and provide for their neighbours, eternal foreknowledge arcs and sparks into new life. Shafts of redemptive sunlight are piercing the gloomy squats with divine mercy. Children are being guided towards a life of learning and earning and security as they are urged into a life of faithfulness and service and sacrifice. Payatas is changing. 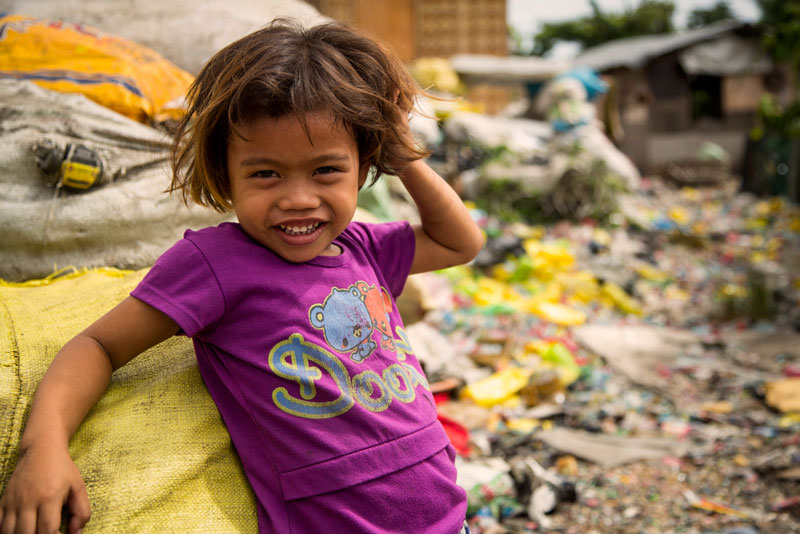 Children like this young girl have a brighter future through the local church and Compassion's Child Sponsorship Program.

Jesus walked a first century Dumptown. He knows its smouldering hell. He called the desperate and destitute—as well as the self-sufficient—into the rich, remade life of the redeemed, off of sin’s scrapheap and into the Kingdom of Light. His cross stood aloft a Smoky Mountain called Golgotha. He pulverised the power of darkness, death and poverty when he walked out of the tomb.

In Payatas, children and their families are discovering, by God’s grace, that there’s life—eternal life—out past Smoky Mountain. Beyond Dumptown.

Colin Buchanan is a Compassion Ambassador and a much-loved singer/songwriter.