When Milton and his friends saw period poverty robbing their daughters of their dignity and even their futures, they decided to fight the stigma and take action.

Carol from Uganda will never forget the mortifying day her pad fell out in front of her classmates.

“One day I was walking to get food and my pad fell out. My fellow students laughed. I was so ashamed. I ran home and got another pad. I didn’t go to school for two days. I was scared," she shares.

All over the world, billions of women have periods every single month, yet menstruation is still a subject rife with stigma, taboos and misinformation. And getting access to the basics required for a safe period are still out of reach for many women. This needs to change—and Compassion and the local church are working together to make it happen.

Period poverty is a significant issue in Uganda. Jacky, the project director of Mulatsi child development centre, says it can lead to teenage girls skipping and eventually dropping out of school and marital conflict. It can even contribute to teenage pregnancy, as nefarious men take advantage of young girls’ vulnerability by purchasing pads in exchange for sex.

In Uganda, a pack of sanitary pads costs roughly A$1.40 but that’s out of the reach for many families struggling to afford a daily meal. Forced to improvise, women and young girls use folded newspaper, old blankets, even pieces of a discarded mattress. Not only are these makeshift materials uncomfortable and can cause embarrassing situations like Carol’s, but the unhygienic nature is a health risk. 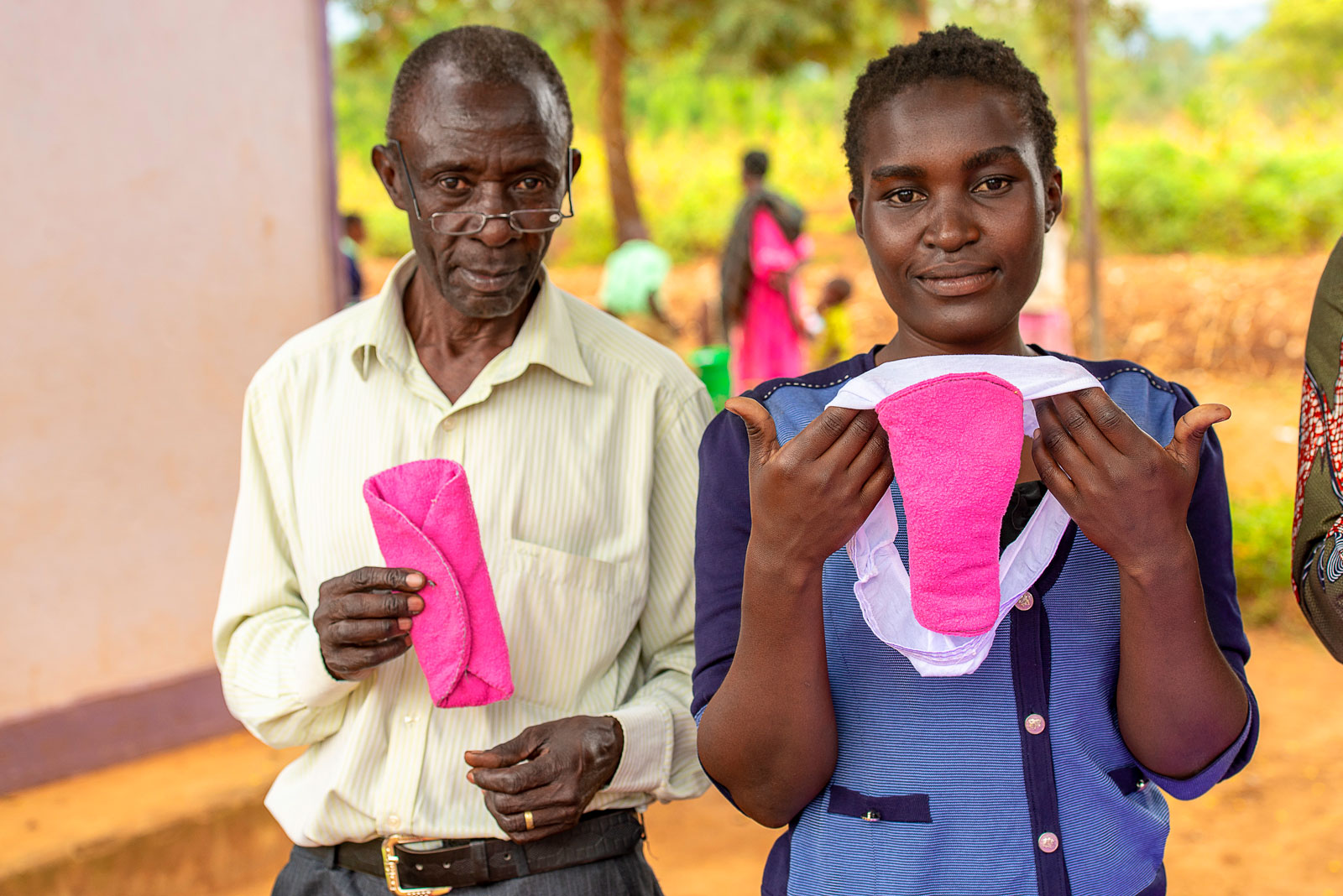 Compassion’s local church partner in Mulatsi held a meeting where the lack of feminine hygiene items was identified as the biggest problem by the local community. Many of the women shared about the difficulties they faced without being able to afford pads.

After hearing her Carol’s tearful story, her mother Florence felt for her daughter but frustratingly found her hands tied.

“As a mother, there was nothing I could do because I couldn’t afford the napkins,” Florence says. “So I bought tighter knickers to hold [the pad].”

Thankfully, the Mulatsi church came up with a solution: to train the local community to make re-usable sanitary pads. Made on a sewing machine using three pieces of fluffy cloth with a waterproof base layer, one set of seven towels costs just a little over A$2 but lasts an entire year. Thanks to generous Compassion donors, the church received the financial support and materials it needed to train the community.

The Compassion project staff trained young adults and their parents on how to make sanitary towels for themselves. But they didn’t stop there. The teaching was extended to three local schools where they instructed both male and female students as well as the local village leaders and all church members.

Everybody who received training was asked to teach others to keep the education rippling across the region. And as a result, caregivers—including men—found a new source of income. The education soon changed traditional mindsets: in Uganda, men often regarded menstruation as a subject that shouldn’t be openly discussed. 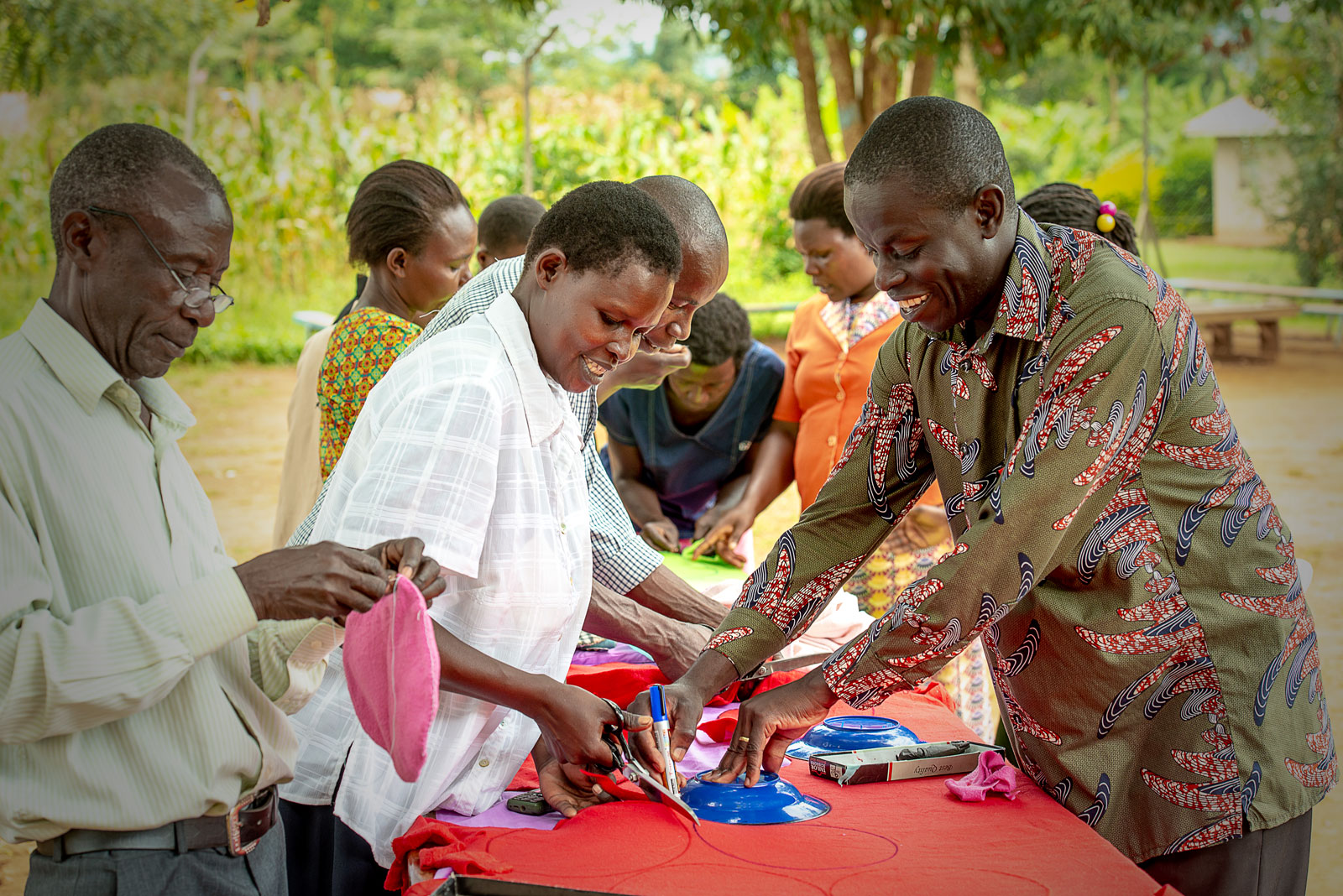 “I thought it was not proper for a girl to talk to me about sanitary towels,” says Milton, father to a Compassion sponsored girl in Mulatsi.

“I have a 16 year old. When she would come to me [with problems about menstruation], I would refer her to her mother.” But his perspective began to change as a result of learning how to make sanitary napkins.

“After the training, I realised that as a father I should learn how to make these sanitary towels,” he says.

“It has also helped me because now I make them and even sell them and get money to do other things. Before I couldn’t provide them, so they would use old mattresses and fold in the cloth, but I discovered that it was unhygienic and [why the women] often fell sick.”

Milton persevered in his new business despite being initially looked down upon by other men.

“In the beginning it was shameful before the men in the community, but to me I found it useful. But I have now educated other men. I think [the stigma came] from a traditional background because our fathers would defer [discussion about menstruation] to the mothers but later I discovered the tradition doesn’t help,” he reflects. Having the ability to look after your personal hygiene and health during a period shouldn’t be a privilege; it’s a basic human right.

Carol is just one of the girls benefiting from Milton, the church's and Compassion's commitment to fighting period poverty. She no longer has to suffer shame and embarrassment. Her story reminds us that together, we can defeat period poverty. For Carol’s mother Florence, the church’s intervention has been a faithful answer to prayer.

“Carol [initially] refused to go back to school but I convinced and encouraged her that one day God would take us out of this situation,” says Florence.

“Shortly after that, the teaching at the church came.”

A version of this article original appeared on the Compassion UK blog.

Day 7: Seeking Justice: Who are my Christmas Elves?