Compassion began partnering with churches in 1968.

1,637
mums and their babies supported

On August 14th, 2021, a 7.2 magnitude earthquake hit southwestern Haiti. Close to 50 child development centres, which oversee more than 17,000 children, were destroyed or reported heavy damage. When a disaster strikes, our mission remains the same: to release children from poverty in Jesus’ name. Compassion has a long history of serving the children of Haiti and we're making every effort to support our affected church partners and the children in their care.

Low COVID-19 testing rates in Haiti have made it difficult to know the full impacts of the virus in this nation. Since the beginning of the pandemic, local workers have distributed over 230,400 food packs and 93,900 hygiene kits to vulnerable families in Haiti.

Gang violence, rampant kidnappings and fuel shortages in Haiti continue to escalate, exacerbated by the assassination of the President in July 2021. Because of the unrest, the Compassion Haiti National Office asked all staff to work from home from September 2021 to January 2022. Local workers are connecting with children and their families over the phone if it is unsafe for them to meet in person.

Letters between sponsors and children have been delayed because of COVID-19 restrictions and interruptions to courier services because of the gang violence. Local staff have been working hard to process the backlog of letters as best they can, as well as investigate creative solutions to child letter-writing such as digital options.

Watch the video below from our local partners in Haiti to learn more. 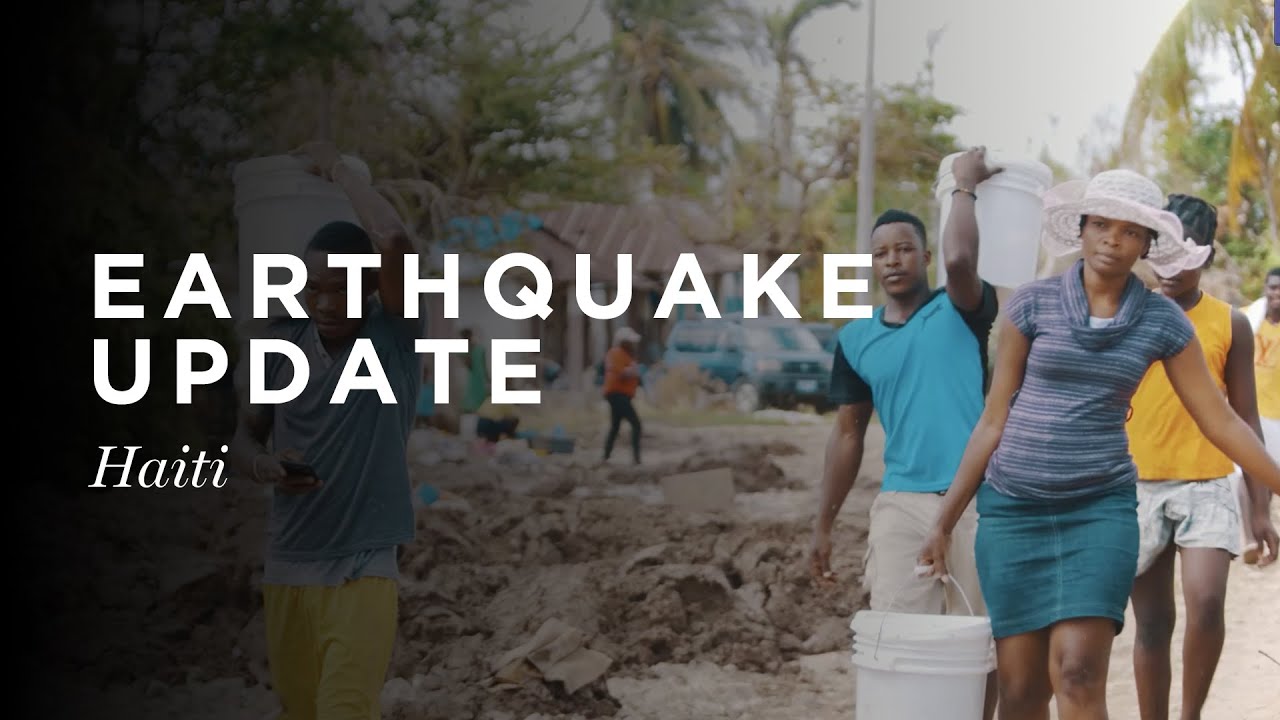 How is Compassion currently operating in Haiti?

Thank you for praying for staff, children and families in Haiti. 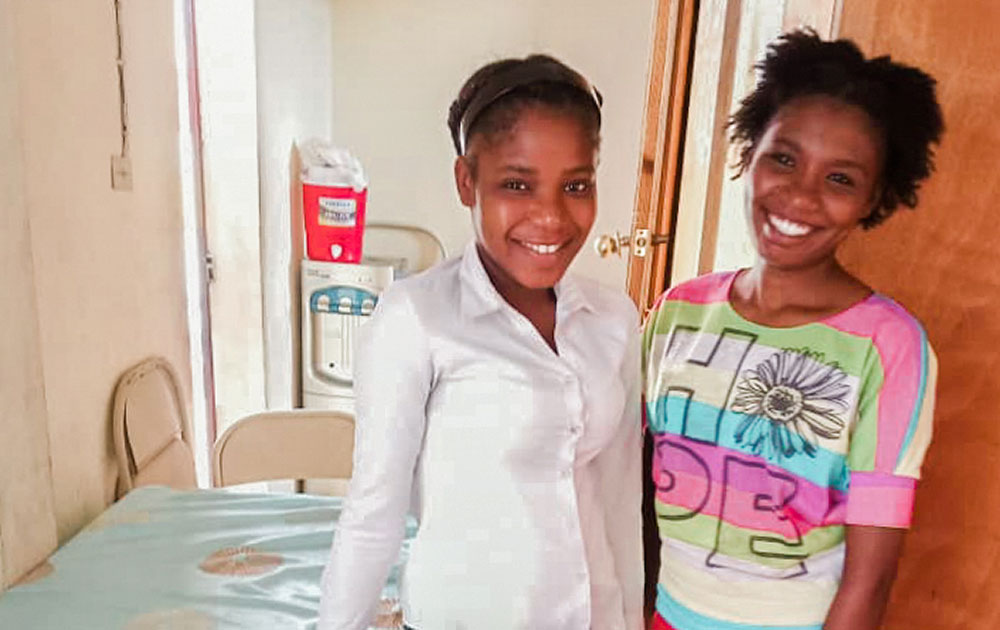 Facing homelessness during a pandemic in Haiti

For sisters Denise, 21, and Rosandie, 18, a pandemic in their community of Canaan meant they would be facing even more housing difficulties in an already weak infrastructure. Both were living with their older sister, Anita, but financial pressure set in and they were unable to afford rent. The sisters thought they only had one option left.   Read more open_in_new

Facing homelessness during a pandemic in Haiti

For sisters Denise, 21, and Rosandie, 18, a pandemic in their community of Canaan meant they would be facing even more housing difficulties in an already weak infrastructure. Both were living with their older sister, Anita, but financial pressure set in and they were unable to afford rent. The sisters thought they only had one option left … to move back to their hometown with their father.

Denise and Rosandie have been a part of the Child Sponsorship Program for over 14 years and are committed to church ministry and their ongoing studies. When they were faced with the idea of moving away from their church, school and friends, they prayed for a different outcome.

“I have been always confident that God would make a way for Rosandie and I. He is always faithful,” says Denise.

The sisters decided to rent a small, cheap room—but that put them at risk during the pandemic. Centre Director Mrs Bienne was moved to change their situation.

“The pandemic season made the situation more urgent because they were very exposed and vulnerable to COVID-19,” says Mrs Bienne. “I was very concerned about their wellbeing.”

She contacted the national office, and together they came up with a solution—they would arrange funding to buy land and build the sisters a permanent home.

“We could have found a quick, temporary option, but they would have the same issue a few months later,” says Mrs Bienne. “Now, with Compassion funds, a portion of land has been purchased on which we will place a house for Denise and Rosandie. This is a quick and permanent response, and these girls will be better prepared to deal with the COVID-19 pandemic.”

The sisters are so grateful for their answered prayer—and can’t wait to enjoy their new home!

Please note: Due to the current pandemic, many centres in Haiti are operating differently to abide by local guidelines and stop the spread of COVID-19. Some are meeting in smaller groups or offering home visits, others have resumed their normal activities.

A snapshot of Compassion's Child Sponsorship Program in Haiti 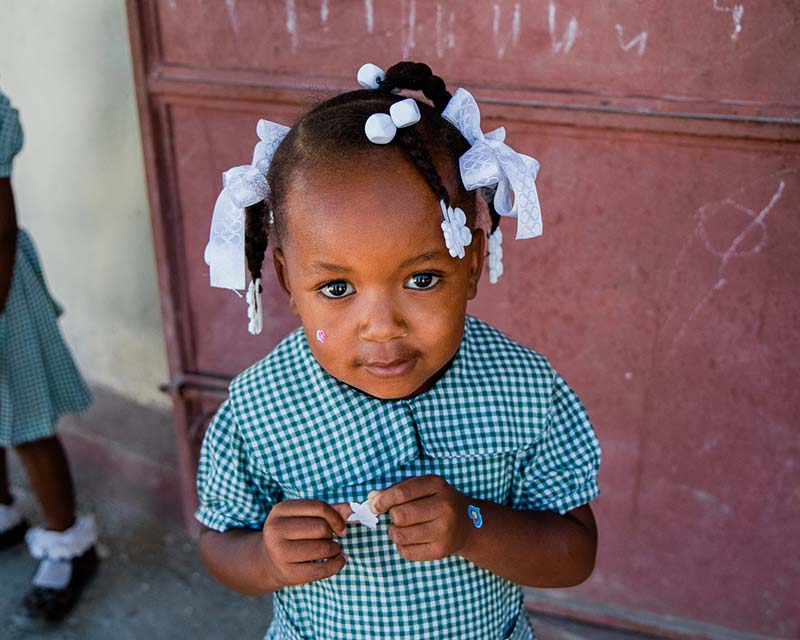 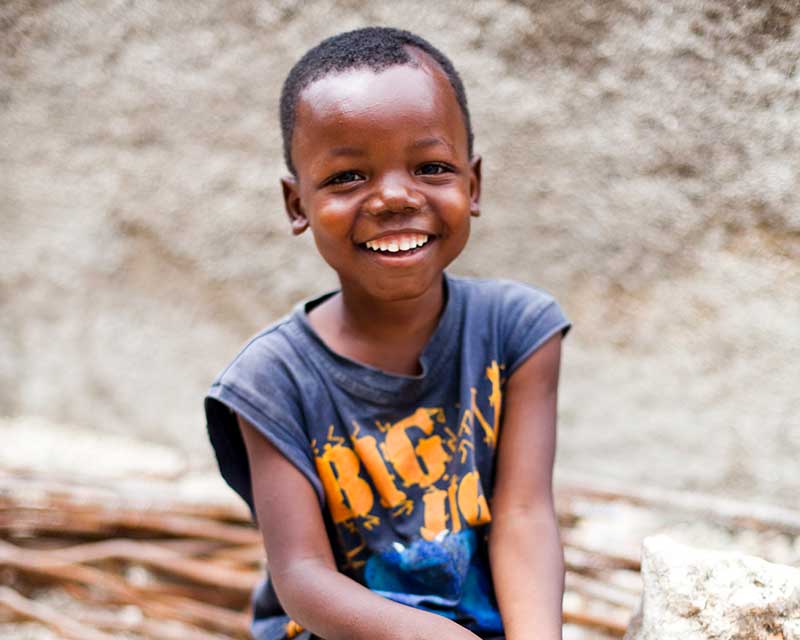 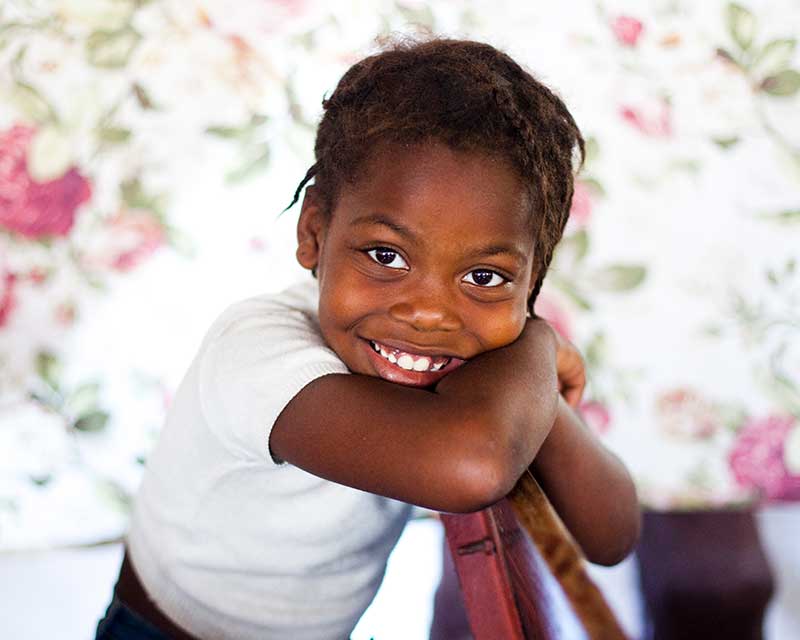 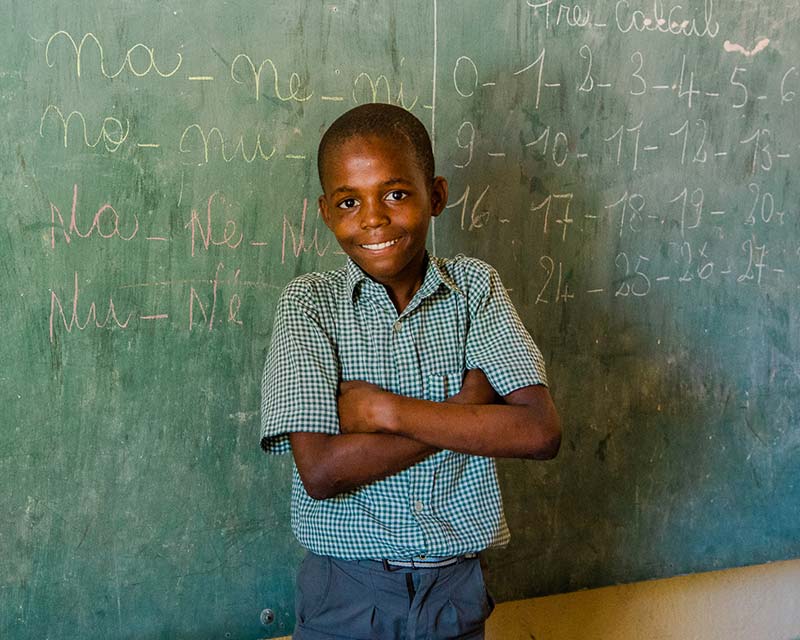 Compassion assisted children in Haiti typically attend program activities at their local child development centre before or after school. Here is an example of what a typical program day looks like for children in Haiti.

8:00am - A time of prayer and devotion and breakfast. A typical breakfast usually consists of eggs, bread or buns and tea.

12:00pm - Lunch and social time. Children often receive sandwiches, juice or milk, or a hot meal of spaghetti or rice, beans, vegetables and meat. There is a special nutritional program for malnourished children.

1:00pm - Health lessons, in which children learn practical health and hygiene lessons, including how to prevent malaria and HIV.

The greatest needs impacting children living in poverty in Haiti

of people can’t read and write

Haiti rose up against French colonial control in the early 19th century to become the first independent Caribbean state. But it has struggled with dictators, coups and corruption ever since.

The government is facing not only the COVID-19 crisis but an energy crisis caused by a choked supply of diesel imports and a lack of a long-term energy strategy. While blackouts and grid disruptions are not new to Haiti, the timing means that hospitals battling COVID-19 are relying on buckets of water in the hallways and can’t use their generators for electricity. What's more, Haitian President Jovenel Moïse was assassinated during a raid on his home on 7th July.

This instability comes against a backdrop of historical destruction caused by earthquakes, floods and cyclones that regularly sweep the nation.

Haiti’s infrastructure is unable to cope with devastating events like the Port-a-Prince earthquake in 2010—and the subsequent cholera epidemic that killed more than 7000 people—and Hurricane Matthew in 2016. Thousands have lost their lives and millions more have had their homes and livelihoods destroyed. These regular events make it very difficult for the nation to build the infrastructure it needs—hospitals, roads, schools and so on—to bring its people out of poverty.

Over half the population lives in poverty, with 40 per cent unemployed. Almost one-quarter of infants have low birth weight, and most people living in rural areas lack access to basic needs such as clean water and sanitation facilities.

Many of the nation’s children live on the streets, forced into prostitution, begging and crime to survive.

Yet the Church is rising again and again in response, meeting children’s physical, emotional and spiritual needs—providing them and their families with the immediate and long-term support they need to get back to their feet.

SPONSOR A CHILD IN Haiti keyboard_arrow_right

Supakan’s home has only one piece of furniture: a cupboard made from cardboard and glass. It’s where her family keeps their favourite, most precious belongings—like Supakan’s letters from her sponsor. Why are letters so valuable to sponsored children? We asked three children from around the world to share why their sponsor’s letters mean so much... Read more