Compassion began partnering with churches in 2004.

626
mums and their babies supported

The COVID-19 pandemic hit Ghana's health infrastructure hard, and many hospitals do not have the capacity to adequately serve their communities. Since the beginning of the pandemic, local workers have distributed more than 282,000 food packs and over 290,000 hygiene kits to families in poverty.

Our local church parnters are starting to resume normal program activities for registered children and their families. Many continue to meet with children in small groups or at their homes in order to slow the spread of the virus and keep staff, families and children safe. Letters and gifts are now being distributed normally.

Check out the video below to watch an update from our partners in Ghana. 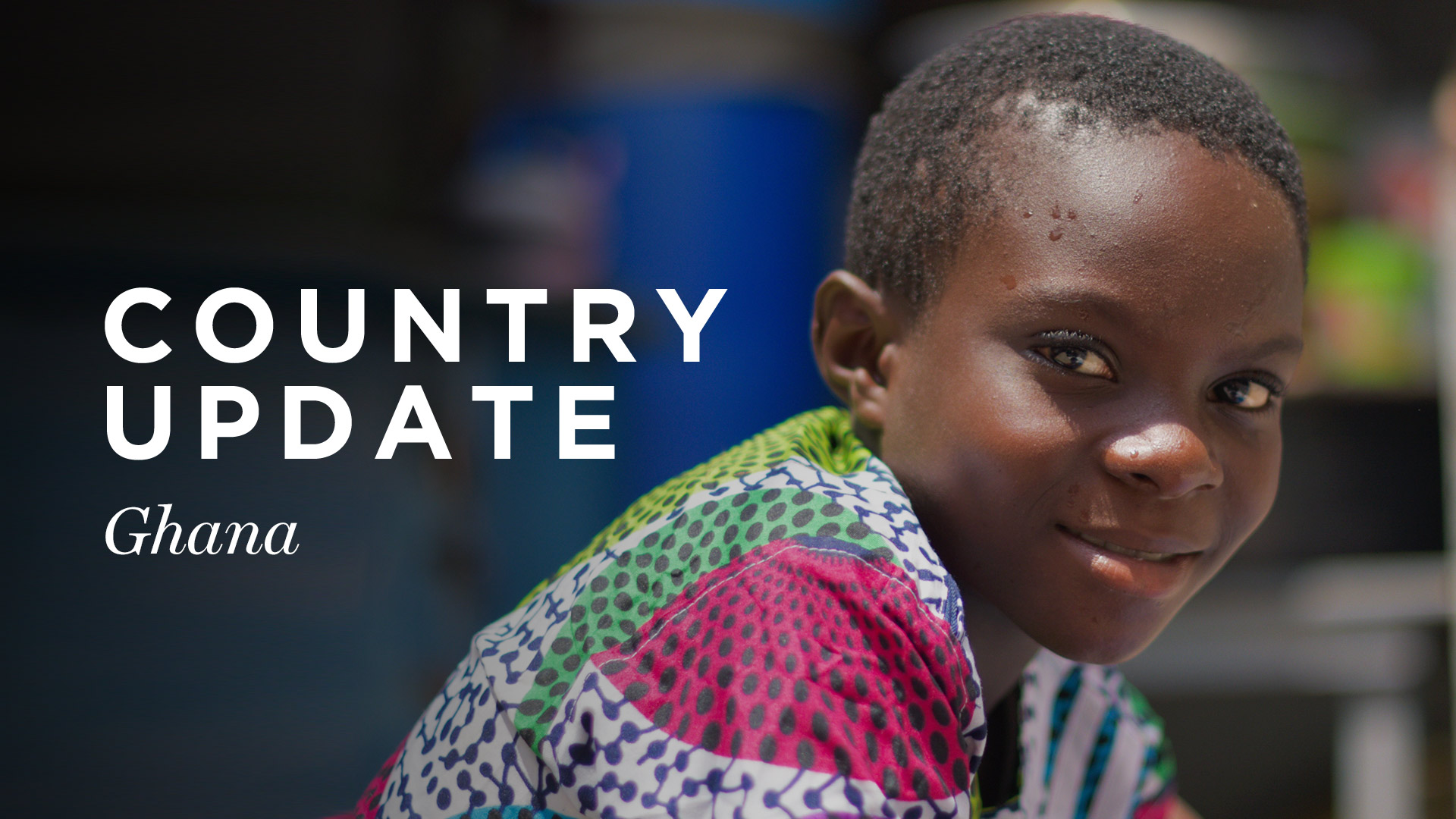 How is Compassion currently operating in Ghana?

Thank you for praying for the children, families and local church partners we serve in Ghana. 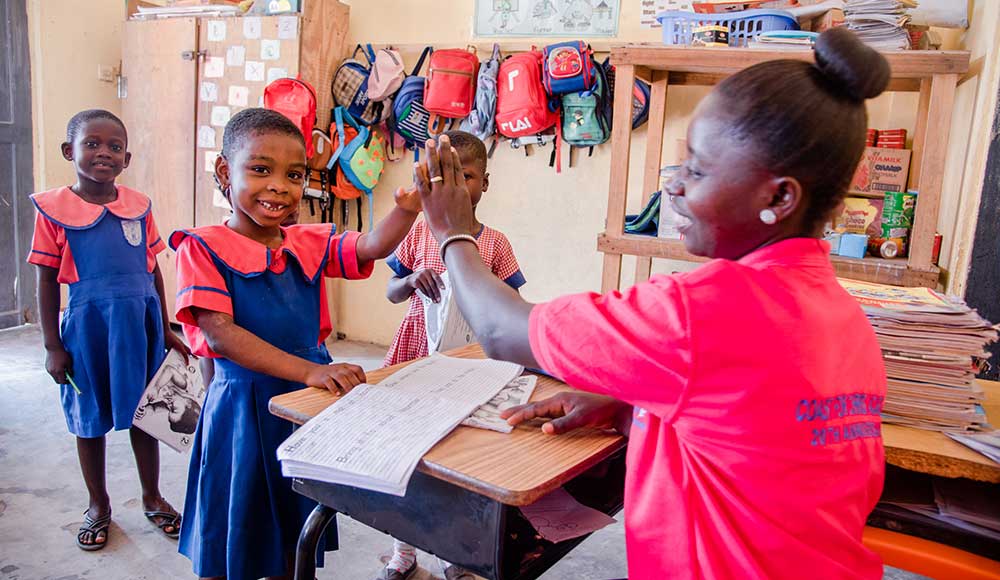 Success for a survival project in Ghana

When Comfort fell pregnant at 17, she not only faced fear and confusion at the prospect of being a parent, but her family disowned her. “My father had plans for me to further my education, but he was disappointed in me for getting pregnant. He washed his hands of me and did not care what became of me,” says Comfort.   Read more open_in_new

Success for a survival project in Ghana

When Comfort fell pregnant at 17, she not only faced fear and confusion at the prospect of being a parent, but her family disowned her.

“My father had plans for me to further my education, but he was disappointed in me for getting pregnant. He washed his hands of me and did not care what became of me,” says Comfort.

Comfort and her partner, Robert, were left to endure a pregnancy in poverty. It wasn’t long until Comfort became very weak—although she never drew attention to it, as she was worried her family would taunt her for falling pregnant.

Despite her condition, Comfort agreed to carry one of her aunt’s twins to the local child development centre so that she could register in the survival project. Unbeknownst to her, this would be a decision that changed her unborn child’s life. God intervened.

With medication and ongoing checkups, she recovered and soon gave birth to a healthy baby girl she named Emmanuella—meaning ‘God is with us’.

Survival project staff regularly visited Comfort, offering her lessons in health, hygiene and preparing nutritious meals, and encouraging her to attend the clinic to monitor Emmanuella’s growth and development. She also received monthly food supplements such as rice, beans, oil, milk and fish. The program staff even paid for her hospital bills.

Though fathers don’t normally join survival project activities, Robert made a point to attend with Comfort to show his support and gratitude. The local church was also able to counsel and guide Robert and Comfort to improve their marriage.

Emmanuella is now a healthy and vibrant seven year old. She transitioned from the survival project into the Child Sponsorship Program; she’s now able to gain an education and has a new hope for her future. And Comfort has saved to meet her goal of becoming a hairdresser to support her family—with the child development centre pitching in to see her dream come true.

Both Robert and Comfort are thankful to the local church and Compassion for helping them to realise a brighter future.

Please note: Due to the current pandemic, some Compassion child development centres are still meeting in smaller groups or conducting home visits. Many have now resumed normal activities.

A snapshot of Compassion's Child Sponsorship Program in Ghana 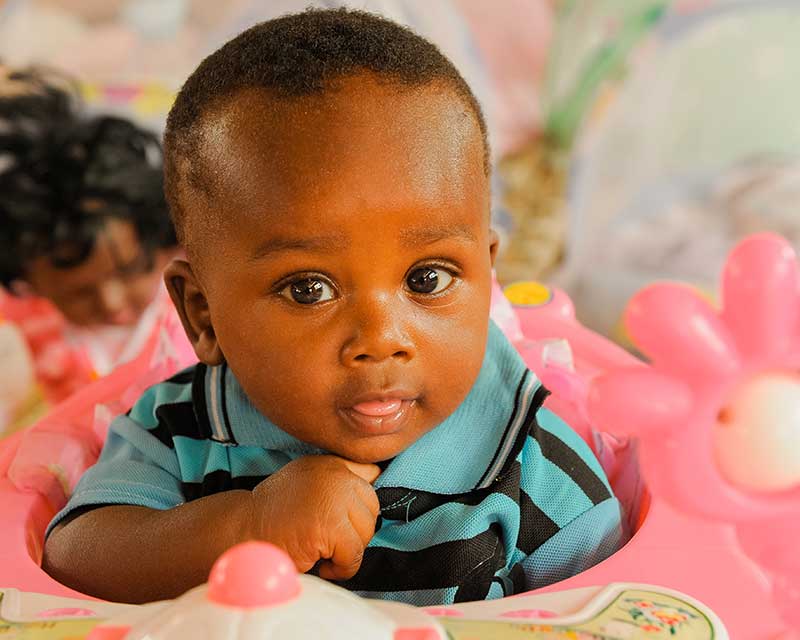 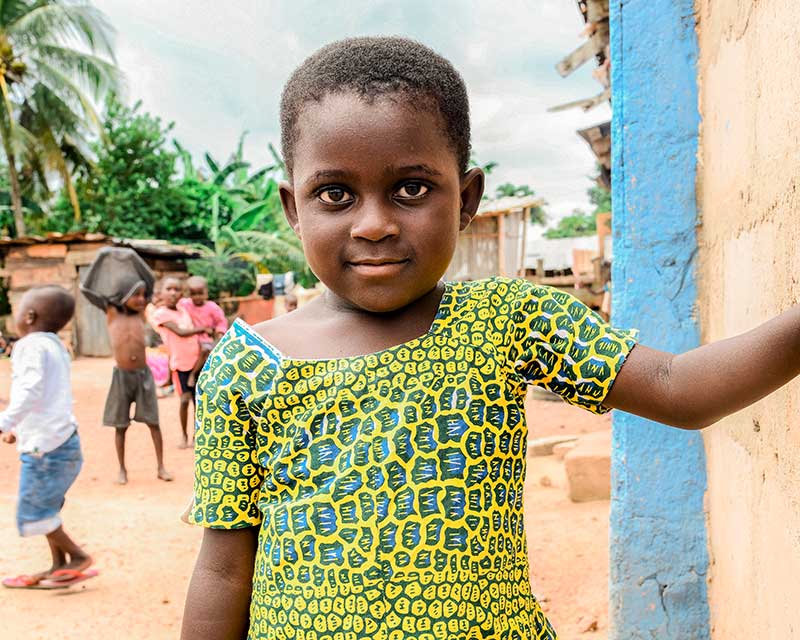 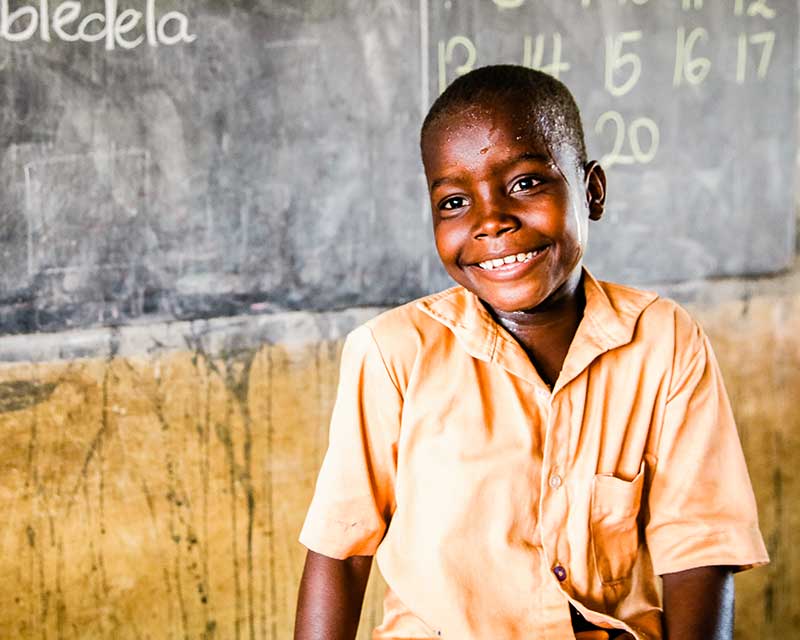 Compassion assisted children in Ghana typically attend program activities at their local child development centre on Saturdays. Here is an example of what a typical program day looks like for children in Ghana.

9:00am - A time of prayer and devotion and breakfast. A typical breakfast usually consists of maize porridge, milk, sugar and bread.

12:00pm - Lunch and social time. A typical lunch generally consists of rice with sauce and either chicken, fish or meat, with seasonal fruit. Food is usually provided as children don’t always have access to nutritionally balanced meals at home. Parents are educated to provide nutritious food for their children, and highly malnourished children are given extra support, including a package of nutritious food such as eggs, milk, beans, rice and oil, once a month.

1:00pm - Health lessons, in which children learn practical health and hygiene tips including how to prevent malaria and HIV.

The greatest needs impacting children living in poverty in Ghana

of the rural population live in multidimensional poverty

Ghana was the first sub-Saharan nation to throw off colonial rule and the first to halve its extreme poverty rate. It continues to be a leader in West Africa as more children pursue their education and living conditions improve. Yet growing inequality means that the poorest are falling further behind.

Ghana has changed significantly in the past few decades. More people are moving to live in urban areas; more children have the opportunity to stay in school longer; the economy is diversifying away from subsistence agriculture (although agriculture remains an important source of employment and income) and it continues to grow.

But economic conditions have worsened in the past five years and these gains are under threat. A gap is widening between the richest and poorest. Those left in rural areas bear the brunt of low incomes but the people crowding into expanding cities face the problems of rapid urbanisation: greater congestion, dangerous pollution, lack of access to safe drinking water and other basic necessities.

Nana Akufo-Addo won the presidential election in December 2016 and recently declared that his nation would be a “shining example” when it came to meeting the UN Sustainable Development Goals and lifting people out of poverty. He also announced 2019 to be the “Year of Return”, marking 400 years since African slaves were taken from their homeland and shipped to the USA—and encouraging the African diaspora to return to Ghana.

SPONSOR A CHILD IN Ghana keyboard_arrow_right

Dignity Restored After Years of Being Hidden Inside

Born with a debilitating physical deformity, Adzo was hidden away by her family from the time she was born and never had the chance for a real childhood. But thanks to Compassion’s Child Sponsorship Program, Adzo has received medical care and is enjoying the chance to go to school... Read more

The 5 Deadliest Animals in the Developing World

Stories about dangerous animals always seem to grab the world’s attention. Africa, especially, is known for human-wildlife conflicts and unfortunately, sometimes children’s lives are lost. But there is one creature that takes more young lives every year than any other animal on the planet. .. Read more